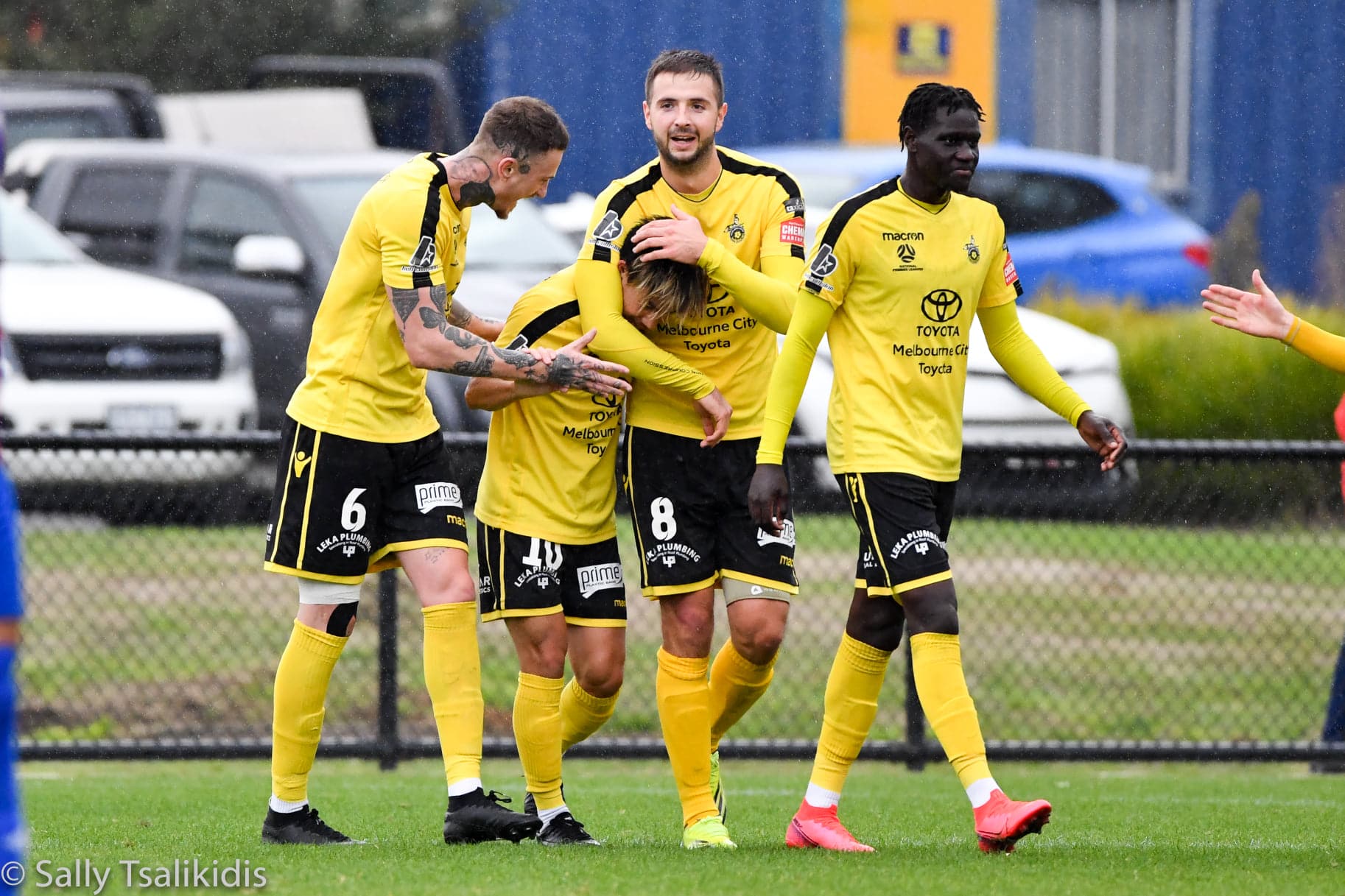 By Alex Bagdasarian   |   April 25, 2021
Comments Off on Bergers Solid Performance

Heidelberg United came recorded another solid win on Saturday against Port Melbourne on its return to Olympic Village, with its pursuit for a top spot on course.

For just the second time this season, the Bergers were hosting a game at the Olympic Village – this on the back of three tough away fixtures that yielded two wins and a draw – and it promised to be a stern challenge for an evolving team. The ‘Bergers welcomed back stand-in skipper Adrian Zahra, with regular captain Reuben Way ruled out with a niggling leg injury.

After a sluggish start, the home side created their first opportunity with Jackson Lino combining nicely with Takeru Okada, the ball ending with Dusan Bosnjak, whose shot flashed just over the bar.

The match opener came just after the visitors had found the back of the net, but with the assistant referee on the spot to correctly flag for an offside. In the ensuing play, a half cleared ball from the away side was trapped by Sean Ellis, who hit a sublime through pass to Josh Wilkins. The latter dragged the ball across the goal face for Okada to complete a comfortable tap in to give Heidelberg United the lead.

Finishing the first half in a strong manner, the Bergers got a second goal to extend their lead with a touch from Ajdin Fetahagic finding its way through a sea of legs and into the net via a Port Melbourne defender for an own goal.

With the second half commencing amongst a backdrop of pouring rain, port Melbournee managed to claw a goal back from an Ammache header via a corner kick.

Sean Ellis almost restored the two goal buffer and threatened to add to the lengthy list of special goals scored with his magical left foot – with his free kick from the edge of the penalty box fizzing rapidly just over the crossbar.

It was Ellis again involved, with his long diagonal pass to Okada opening up the Port defence. The diminutive winger angled it back to Thomas Strickland whose header back across goal was handled by Bombaci, leaving the referee with little option but to award a penalty and a second yellow and dismissal for the Port player. Bosnjak calmly stroked home the spot kick, his second in three matches, to give the ‘Bergers a comfortable lead.

The win cements the ‘Bergers in third spot, trailing second-placed Avondale on goal difference, and just one point behind top of the table South Melbourne.

George Katsakis spoke to HUFC TV in the post-match interview about the game.

“l think it was a good game, after we settled in we started to gather a bit of momentum and really string a few good passes together. I suppose it was made a bit easier once we got the second (goal), we took full control of the game – credit to the boys for showing great character.”

Lewis Hall, gradually regaining match fitness after returning from a lengthy spell on the sidelines through injuries, shared his thoughts on getting regular game time in the previous weeks.

“l am loving it. The first couple of games was a bit of a struggle, but right now l am getting back into full stride – feeling like l am supposed to be there, rather than coming back from injury. So, the more game time l get back playing, the better l feel.”

Heidelberg United will look to carry on with its run of good form when it comes up against Dandenong Thunder next Saturday (May 1) at 7pm at George Andrews Reserve.