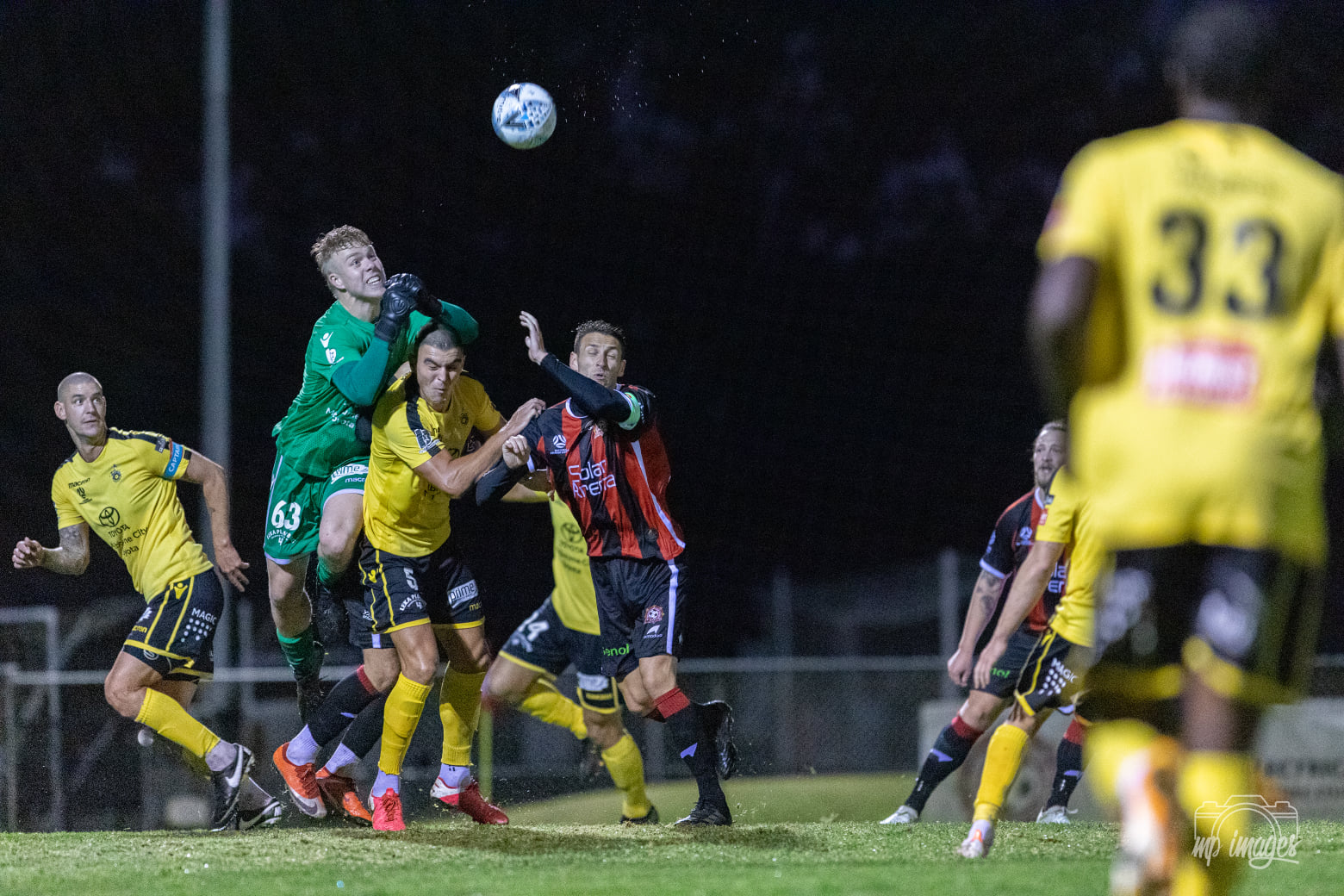 Under floodlights and in treacherous conditions giving a preview of what we might expect more of in the months ahead, Altona Magic and Heidelberg United fought out two halves full of drama and goals in an exhilarating draw at Paisley Park.

The conditions and strong opposition meant the new crop of Warriors would have to work doubly hard to produce their first win of the season. The task looked even more difficult with the late withdrawals of several key experienced campaigners, including the ageless Adrian Zahra, the skipper Reuben Way and goalkeeper Chris Theodoridis.

The ‘Bergers came up against former teammate, the pugnacious Harry Noon, who joined Altona after five fantastic seasons at Olympic Village.

The new recruits started brightly with flashes of individual brilliance and swift counter attacks. In the early going, a deflected shot from Okada was cleared off the line from the Magic.

Strickland almost provided the game opener, picking up the ball deep in the opposition half and following a great run, his left foot strike fizzed agonisingly just wide of the bottom corner.

Towards the end of the first half of proceedings, the home side took the lead from Noon’s free kick, initially well saved by Eres, but Markovksi was on hand to tuck the rebound away. Shortly after, a strong header by Archibald from a corner kick, saw the home side double its lead.

Within moments of the main break, Heidelberg was dealt a further blow, with Roberts receiving a second yellow card to reduce the ‘Bergers to 10 men.

It was hell-bent ambition and gritty determination that saw the new look ‘Bergers claw their way back into this game with a Strickland strike forcing the ‘keeper to make a save.

Coming off the bench, Milovanovic’s leaping header from a corner kick got one back for the ‘Bergers, giving them a lifeline. This was quickly followed by more pressure as Lino’s strike from close range was saved.

In the final moments, like a Phoenix rising from the ashes, the stirring comeback was complete when another substitute, Ashton, was at the end of a great team move to provide an extraordinary coda to the game.

George Katsakis was again optimistic in his post-match interview.

“The players have started to adapt to the Heidelberg spirit and the Heidelberg way. I am just lost for words, it was an incredible comeback – down to 10 men from early on and just to never say die and keep going,” he said.

Stand in ‘keeper, Nick Eres revealed the whole team was positive they would get something out of the match going into the break, despite the circumstances.

“It wasn’t looking great at one stage, but we all got into the rooms and thought we had half a chance. We were lucky enough we scored the first goal by Dane and then the second goal came straight away.”

Heidelberg United will look to build on this performance as they come up against top of the table Green Gully on Friday night.