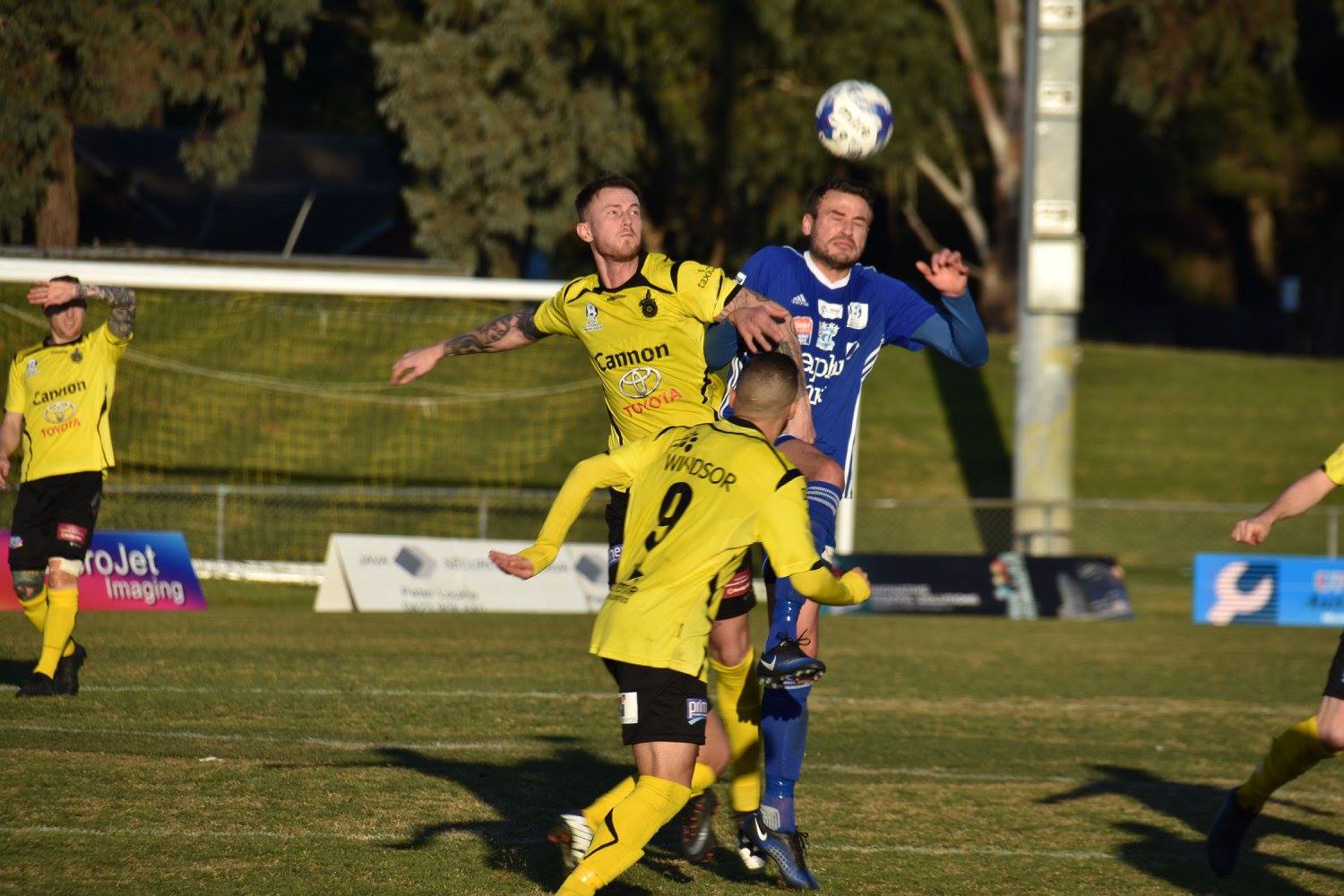 Think Russell Crowe’s ‘Gladiator’ and the Germanic tribes facing the massed Roman legions. Or maybe ‘Braveheart’ or 1964’s ‘Zulu’. Or every second western epic of the 1950’s. You know, the column of cavalry troops fights off the whooping, hollering Comanche marauders. As the last of the fleeing braves disappears into the brush cue a close-up of a wide-eyed army private.

Incredulous, his jaw agape, the private stares at the hilltop above. “Sarge, you better see this”, he whispers. Cut to a silhouette of a lone warrior on horseback, high above. Then another, and another. As the camera draws back and pans across the mountain ridge ten Comanche shadows become twenty and then thirty, until hundreds are cresting the hillside, holding weapons high and readying for battle. That’s the next wave.

Dramatic, perhaps? But Heidelberg United Alexander scored two significant victories last Friday night. On-field, the New Wave Warriors were born. More significantly, what was perhaps lost in the euphoria of the evening was the life-affirming return to the senior squad of ‘Long Striding” Lewis Hall.

In June 2019 – Hall’s 99th game for the Warriors – his season ended with a knee blown out and a full reconstruction required. There were fears he’d never play his milestone 100th. Days after the imposing 190cm utility’s knee operation in 2019 we chatted at the social club. Hall’s eyes conveyed a vague combination of sadness and fear. I thought it was just about the football. The reality was that a new wave of Hall’s inner demons were already starting to cloud his mind.

Losing football and the promise of tough rehab and a twelve month wait to play again was the tip of an iceberg. Simply being able to earn a living became a concern. It’s a tough ask with a painful limp and wearing a moon boot. When season 2020 cancelled, Hall’s comeback was off the menu. Then came the social isolation and desolation of lockdown. Then the rumours started circulating and all we could do was hope that we’d see the big fella with the broad grin and warn handshake when life returned to some normality.

Fast-forward to last weekend and the now fit and feisty Hall is expansive about his long-time battles with depression and mental illness. And how he credits football and Heidelberg United with playing significant roles in his recovery.

“No, I’m happy to talk about it”, Hall explains. “I think it’s important to talk about this stuff and get the message out there to people who are struggling a bit. Let them know there’s hope and they can get through it. I’m not going to shy away from what happened, but it’s coming together again”.

Football had been a prime partner in Hall’s life when everything went sour. The club cared for him and he for the club and, of course, his teammates. It gave Hall’s life structure, meaning and an outlet. Suddenly there wasn’t the camaraderie of mates, no coaches or officials to bark commands or crack the whip. The loss of football, he believes, hit him hardest.

“I took it (football) for granted, I think”, he said after Friday’s win. “I think getting back I am appreciating it a lot more for being one of those things that bring you real happiness. Yeah, I feel OK”.

“It’s not just about the football, it’s about life getting back on track”, Hall says. “I’m not proud, because I definitely hit rock bottom. But I’m pleased with myself for getting back to this place and football has been a huge aspect of that. It’s helped enormously. Getting back to the club – this club”.

Intimidating as he appears, Hall is one of Heidelberg’s really good blokes. Genial. Up for a chat and a laugh. Not, however, the type you’d most wish to play against and perhaps Hall’s return is timely, given this 2021 Warrior new wave may need a genuinely fearless enforcer on deck into the wintery months. He’s picked quite a time to re-emerge as a senior squad member. Hall watched from the bench as Heidelberg United returned to centre stage last Friday night and was impressed.

Hall’s welcome return marked the night the ‘No-Names’ of 2021 rolled ladder leader Green Gully 2-1, marking a sensational third consecutive road comeback for the brash, young Warriors. So there was so much to like about the night – unless you’re a rival NPL Victoria coach and watching the gathering storm that is our New Wave Warriors.

I can imagine 13 other senior bosses around the league scratching their heads this week. The new-look Bergers were virtually written off before the season got underway. “That bastard Kats”, they’re probably mumbling. “He’s already found his new wave of Warriors”. And their concerns are valid. These New Wave Warriors aren’t the finished product by any means. But they are learning to play a fast, edgy, aggressive and fearless brand of footy and the self-belief will be jet-propelled after clawing back at Oakleigh, Altona and Gully.

And Warrior supporters will be loving the overtly passionate displays of chest-thumping, badge-smooching and colours honouring from the likes of big AJ and also rather big, Luka Ninkovic. The internet generation has meant a shift in fan to team relationships, yet Alexander has done much to encourage loyalty and love of club and what it represents, and supporters will warm quickly to and immediately identify with players who share those values.

And on values, I like to believe Alexander stands for something more than just on-field success. That good young men and women will be encouraged to be part of the Warrior family. And that our famous club aspires to ensure that when young people move on – for whatever reason – that they leave as better people and the club stronger for their time with us. And we support each other, always.

When Lewis runs out for his 100th game in the yellow and black of Heidelberg United, I will feel joy for him, and so very proud of this famous club.