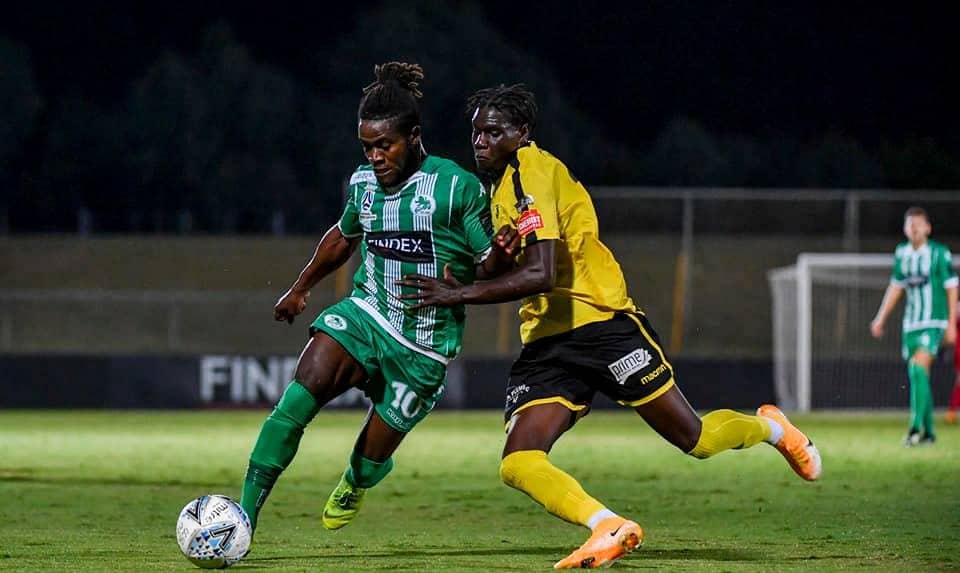 If the performance last week was anything to go by, the ‘Bergers made sure no one was in doubt with a stirring second half fightback against table toppers Green Gully.

On the road for a fourth week in succession, the ‘Bergers welcomed back Chris Theodoridis between the posts, but again went in without the likes of Sean Ellis, Reuben Way and the veteran Adrian Zahra for at least another week.

The home side had an early glimpse on goal with Theodoridis making a save at the near post. Shortly after, Dusan Bosnjak was able to push forward and fashion a chance for Justin Micallef for the ‘Bergers first opportunity of the game.

On the cusp of half-time, Green Gully took the lead from Alex Salmon, who flicked in a header in from a free kick.

The Warriors came out in fighting spirit in the second half, desperate to show the Warrior mentality to spur them on to another comeback.

Thomas Strickland did well to shield the ball in the oppositions half for an outside ball to Josh Wilkins whose rifled shot was only parried away – allowing “The Heatseeker” Micallef to bundle the ball home and notch his first goal for the club.

The adrenaline levels rose as the ‘Bergers sensed an upset on the cards, now pushing forward to go one step better against such an historic rival.

Gully were scrambling to push forward, but the diligent work of Wilkins allowed him to intercept a pass before feeding it to Micallef, who skipped past his opponent, then found substitute Luka Ninkovic with a low cross. The striker’s first time shot ricocheted in off the bar to give his side all three points.

“The Heatseeker” Justin Micallef spoke to HUFC TV in the post-match interview about the build-up to the game.

“It’s massive for us, we knew what we had to do. Kats told us the game plan and Pacey stepped up tonight – he did a fantastic job in getting the three points. We move on to the next game and hopefully getting a couple more and pushing up to the top,” he said.

Josh Wilkins, now one of the senior members of the squad, revealed this team reminds him of the Heidelberg team a few years back for the hunger to learn and determination shown by the promising crop of youngsters coming through the ranks.

“We knew it was going to be a bit of a graft, so it was going to be a bit difficult so we just had to set up shop a little bit in that first 45. This team reminds me of the ‘Bergers back in 2017, we are always fighting, we’ve also got a lot of young hungry kids that want to prove their point, and this is just the start of something pretty special.”

Heidelberg United will look to consolidate its recent good form resulting in its first win of 2021, when it hosts Dandenong City next Sunday evening (March 28 at 5:00pm) in the club’s first official game at Olympic Village this season.