HEIDELBERG IS A DIFFICULT PLACE TO LEAVE 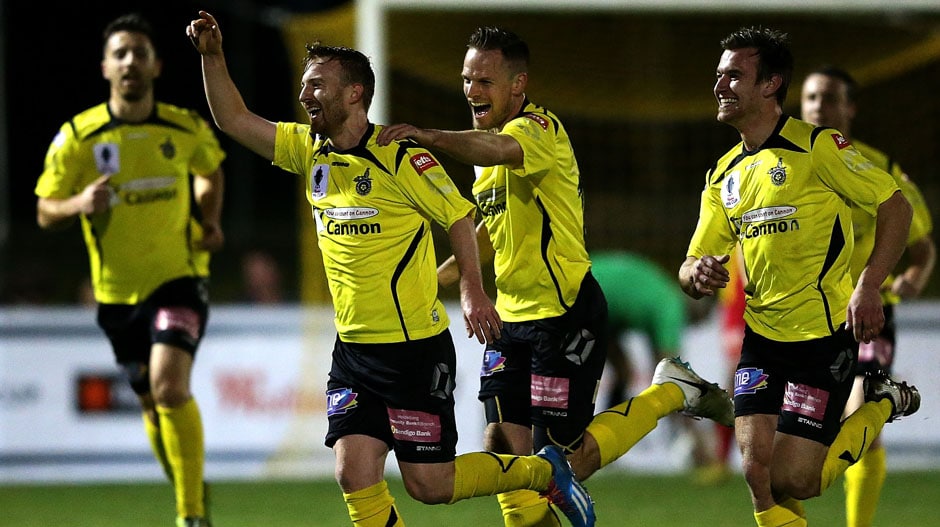 By Greg Blake   |   December 6, 2020
Comments Off on HEIDELBERG IS A DIFFICULT PLACE TO LEAVE

So, with a minimum of fuss and fanfare, ‘Jumping’ Jack Petrie has officially left the building. A mainstay of Heidelberg United’s unparalleled run of success between 2017 and 2019, Petrie bade a fond farewell to the Warriors last week after seven seasons and 167 unforgettable games in the gold and black.

Ranked all-time 21st in the club games played – sitting him alongside legendary club figure, the late Jim Mangopoulos – Petrie departs with no regrets and leaving a legacy of priceless ‘Kodak’ moments. And whilst it’s not entirely reflective of his top-shelf playing qualities – considerable in their own right – Petrie’s old school ultra-competitive, knock-‘em-down, take no prisoners bravado was a trademark. And Warrior fans loved him for it.

When tempers flared and the flag required flying, Harry Noon and Petrie, – the latter sporting that trademark smiling assassin grin of his – were inevitably front and centre. Annoy, antagonize and annihilate, usually in that order. Petrie has scored his share of scorching goals, but I still get the tingles recalling his maverick moments. Like the night he flattened Abascal Munoz in the Tommy Cahill comeback game at Pascoe Vale.

Come on! As unseemly as it may be, I guarantee there wasn’t a Warrior fan at the C.B. Smith who didn’t quietly mumble to themselves: “You beauty, Jack” on that angry night. Also the night HUFCTV team unofficially anointed Petrie the spiritual skipper of the demolition crew commentary team affectionately dubbed the ‘Axis of Anger’. His scoreboard reads total of 33 yellow cards and three send offs over the journey

“It’s probably in my DNA. I’ve always seen myself as a bit of a grafter, a fighter”, Petrie reflected, following his farewell announcement. The 31-year-old leaves Catalina Street for parts unknown. He hasn’t retired as such, the touchingly reflective Petrie is merely off on a life journey along roads less travelled towards destinations unknown.

He’d been contemplating away from the Warriors for some time, “but Heidelberg is a difficult place to leave,” he explained. “The environment in the change rooms was something else. The culture, the players were close and we really stuck together. I have never experienced anything like that before.”

“I wont realise until after I leave what we have achieved and what a great club this is”, Petrie said

“I’ve thought about (leaving) for the past three years and I’ve been thinking about what I really wanted in life. I’m getting a bit older and wiser and I want to see what the next chapter in line is going to be.

In becoming the eighth of the legendary ‘Cardiac Kids’ to depart Heidelberg since the club clinched a remarkable third consecutive Premiers Plate in 2019, Petrie concedes losing so many teammates from the most successful era in club history may also have played some part in his decision. “And we’ve given it a good hammering, really. After a while I think you lose a bit of desire and motivation. It’s been a pretty intense journey”, Petrie concludes.

“I’m pretty relieved now the decision has been made. I mean, I’ve really enjoyed the seven years at Heidelberg and Kats (coach, George Katsakis) is a weapon. It’s just time really”.

In relishing all the ‘axis of anger’ fun, I reckon I’ve been guilty of underselling Petrie’s footballing skills and smarts at times, but he’s been as hard-working, all purpose, in and under provider as any going around. And it must be noted that a good many of his 19 club career goals have been absolute monsters. He launches missiles from downtown with venom and intent. Petrie reckons his best was the boomer at Broadmeadows Magic a couple of years back, which won FFA Cup Goal of the Week.

His 96th minute winner in a 3-2 at Devonport in the cup in 2018 was memorable, but have a look back at the screamer at home against Dandenong City in 2019 or the launch which left vapour trails as it rocketed past the Avondale keeper at Knights Stadium in 2017. Bloody brilliant.

“I don’t think I really realise yet how special it was to be part of this club and the team we have had,” says a thoughtful Petrie. “And we are just custodians, after all. I just hope I am remembered as someone who had their head screwed on and was there to offer a bit of guidance and support to teammates if they needed it. That I was there to have a chat with”.

The game craves characters and adores the unpredictable, the gunslinger, the wild child and the maverick with the sometimes very short fuse. Tenacious, brave and ready to go in for his mates, Petrie was and remains all of these things. The game should always embrace the likes of ‘Jumping Jack’ and Petrie’s departure leaves Heidelberg United having to say farewell to yet another beautifully unique champion of the club.

Warrior Nation says a heartfelt thanks.

Footnote – Sad to note that the ‘Rat’, Alex Gymnopoulos, has also exited Catalina Street after four seasons as the coach of the Under 20’s. I’ve always remembered the ‘Rat’ in his playing days, especially at Northcote City. Be assured, he was a gun. More latterly I’ve enjoyed being in his company around the club. He’s a ripping bloke. Always terrific with a chat and a smile, Alex was a pleasure to spend time with and I’d just like to wish him all the very best going forward, in footy and in life.