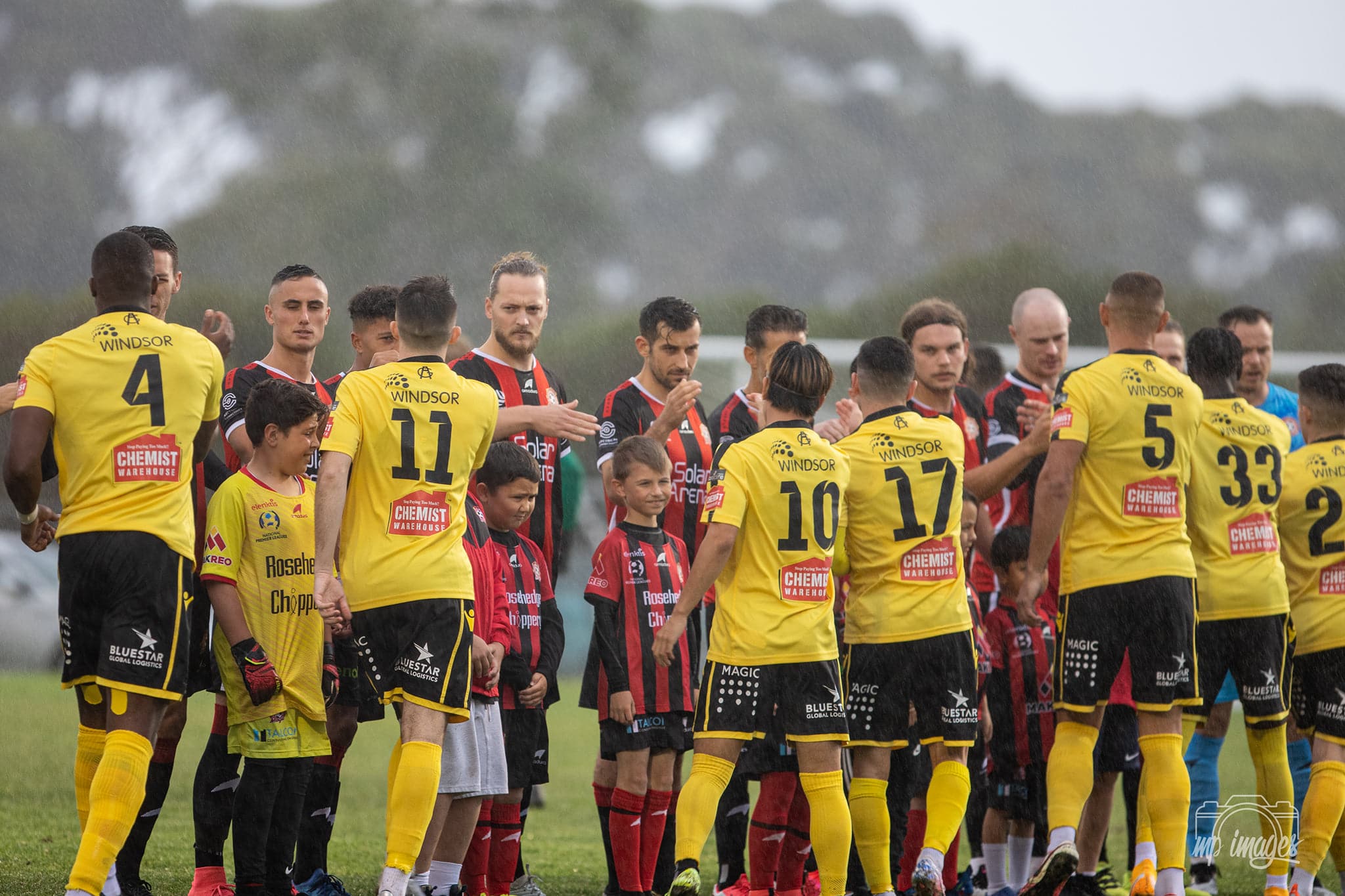 As more grey clouds rolled in and dirty Saturday was giving way to an even wetter and wind-blasted evening, Paisley Park – at that point – was hardly the place I’d have expected a very timely reminder of what makes this beautiful club something special and why belonging to the Heidelberg United Alexander family is something else again.

We’ve been blessed with so many unforgettably glorious moments in recent years, but for the entire Warrior contingent things were looking pretty damned grim in the hour prior to game time against Altona Magic last weekend. It took a trademark Steven Pace smile to turn the tide.

An hour before kick-off the HUFCTV crew had already been bumped from the indoor media room, our cameraman had been shunted about, the broadcast tower was off limits, ‘Speilberg’ Rahovitsas was off on a potentially 80-minute cross town mercy dash for a cable to get us to air and the weather was, well, shithouse.

And as Pacey and I chatted pre game, the new assistant coach mentioned, in that typically matter-of-fact way of his, that Ellis was still out and now Way and Zahra and bloody Theodoridis as well would all be missing. “But”, Pacey added, “we’ll do something a little bit different today“. And then he added that perfectly understated Steven Pace smile, perfectly blending light-heartedness, professionalism and humility all in one. “I reckon we’ll do alright”. And off he went.

I should have trusted Pacey’s smile. It did made me feel better, at least. Rahovitsas returned in the nick of time to get us on air and he was smiling. As was J.Fot, even with the realisation that we’d be calling the game for HUFCTV outdoors, standing in mud, with a rubbish bin for a desk and using live electrical equipment in the tumbling rain.

Even young Alex – a terrific work experience kid – was grinning wildly as he dutifully spent the entire game keeping an umbrella aloft over the broadcast team. Despite little cause for optimism the Warrior family was gathering near the broadcast area and – as always – it felt good to be amongst them, regardless.

And Josh Wilkins was back, after all. And even if he was the only Heidelberg player available from the squad which clinched the Premiers Plate at South Melbourne just 18 months ago, the “New Warriors” were doing alright indeed in the early going, just as Pace had predicted. It felt odd to see Harry in the red-and black and although he tried to ruffle a few feathers, he just seemed a bit out of place and I wonder whether – in his quieter moments – Harry is missing the club he called home for seven years. Rain tumbled and wind gusted and half time was a mere handful of minutes away when Heidelberg’s odds drifted from ‘long shot’ to ‘rank outsider’ and then ‘do not resuscitate’, in rapid succession. A couple of Altona Magic goals, big bodied Mallon Roberts sent off and not a single Cardiac Kid on the horizon to save the day.

But instead of planning the funeral, at half-time the broadcast team were joined around the rubbish bin by a clutch of hardy waterlogged Warrior fans – familiar faces all – and we laughed and joked and smiled our way through the break and simply enjoyed the company and the chatter and hoped to see a few more positive signs in all the new faces, who had, after all, gotten off the canvas at Oakleigh a week beforehand.

We could hardly have expected the minor miracle which rewarded the faithful with such fist-pumping, magical moments provided by but hardly expected from the boys. It wasn’t exactly a fairy tale, but heck it was huge fun coming back to 2-2 at the death and against the odds. It’s not going to happen every week, but the confidence and belief that second half will give these newcomers may be priceless over the journey.

J.Fot already has a man crush on young Falla, and I’m loving the dash and dare of Micallef. Gut feeling tells me Strickland will hit a hot streak soon. Okada is settling steadily and I reckon Ashton may be a starter sooner than later. I like Castiello’s strength and Fetahajic – call security – is a ripper and getting better. Roberts is a beast and we’ve seen signs of something in all the new faces at stages in the early going. And canny Kats is building once again.

For Theodoropoulos, Milovanovic, Ninkovic, Lina and even Nick Eres in goal, just where this journey is heading and what stories are going to be written in the history books about the new generation Warriors is anyone’s guess. But I’m hoping last Saturday night is a preview of the main feature to come. Given Josh’s return and those of blue ribband quality – Reuban, Chris, Adrian, Dusan and Seanie – to follow in the weeks to come, I reckon we’ve got some fun to come in season 2021.

As for the Heidelberg United supporters – especially those who ventured down to Paisley Park and were rewarded with that stunning comeback – thanks once again for reminding me why this club is so very damned special.

By the way, Pacey ended the night just as he had started, with that unassuming grin of his.