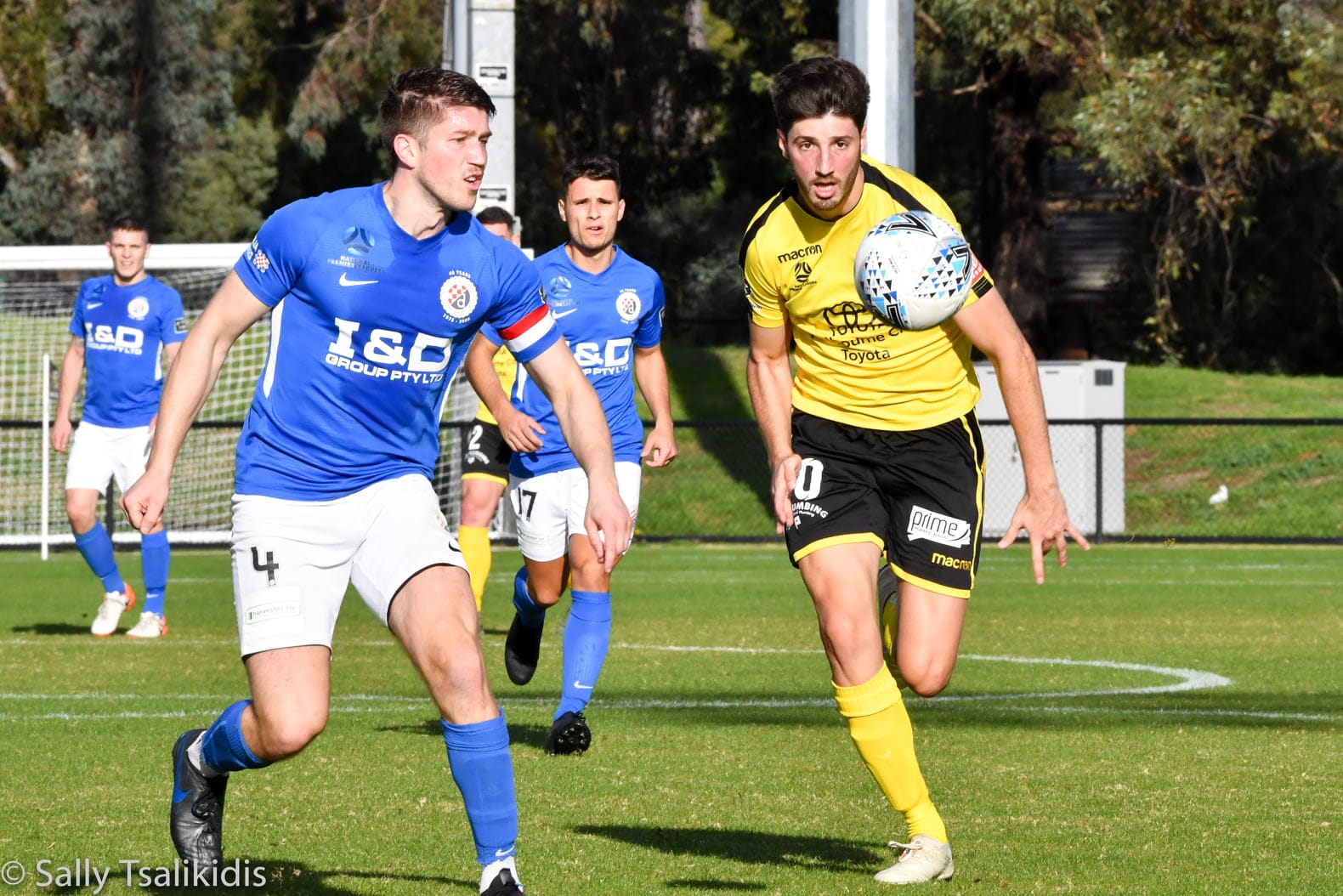 A Mother’s Day clash on Sunday saw Heidelberg United with a chance to grab top spot if it could take all three points. Facing a desperate St Albans at Olympic Village, the opportunity was missed with the match finishing in a draw.

With three changes being made to the line-up, the Warriors were pressed in early proceedings, with the away side squandering two clear-cut opportunities. Monek blasted over the bar from close range & then Hart capitalised on confusion at the back, only to be denied by a great save from Chris Theodoridis.

A long throw in from Wilkins ended up with Ajdin Fetahagic feeding it off neatly to Sean Ellis, whose shot on target was blocked.  The ‘Bergers also had a goal disallowed due to an offside.

Early in the second half, Luka Ninkovic pounced against a hesitant defence, before squaring the ball into the centre it for Okada to tap it home and give Heidelberg the lead.

In a ten-minute flurry of cautions and cards, a second yellow to Falla meant he was sent off prematurely with the Warriors having to show their fighting spirit once again. Just moments later, a red card to the away side for Adam Hodor meant it was going to be an exhilarating finish with both sides down to 10 men.

Twice in rapid succession, Ninkovic could have sealed it for the ‘Bergers, only to see his headed efforts twice go just over the bar.

St Albans scored its goal with the strike from Hart via a deflection from Mallan Roberts, to put the late pressure back on the Warriors.

The Warriors were persistent in their effort to grab that late goal deep into stoppage, with first Ninkovic and then Bosnjak finding it impossible to score the winner.

The draw means that Heidelberg draws on points with South Melbourne and Avondale, with the season approaching its half way mark.

HUFC TV caught up with a disappointed George Katsakis in the post-match interview, mentioning the change of formation played a role.

“The whole group is disappointed, it’s one of those games where you need to be really mindful of the bottom teams fighting for survival, nevertheless l think it’s unacceptable from us fighting for a top spot and really not exhausting all avenues was a little bit disappointing for me. The natural drive of people like Jackson Lino or Reuben Way had a huge effect but it’s still no excuse.”

Heidelberg United will look to bounce back to winning ways when it goes up against Hume City away on Saturday (May 15) at 5:30pm at ABD stadium.