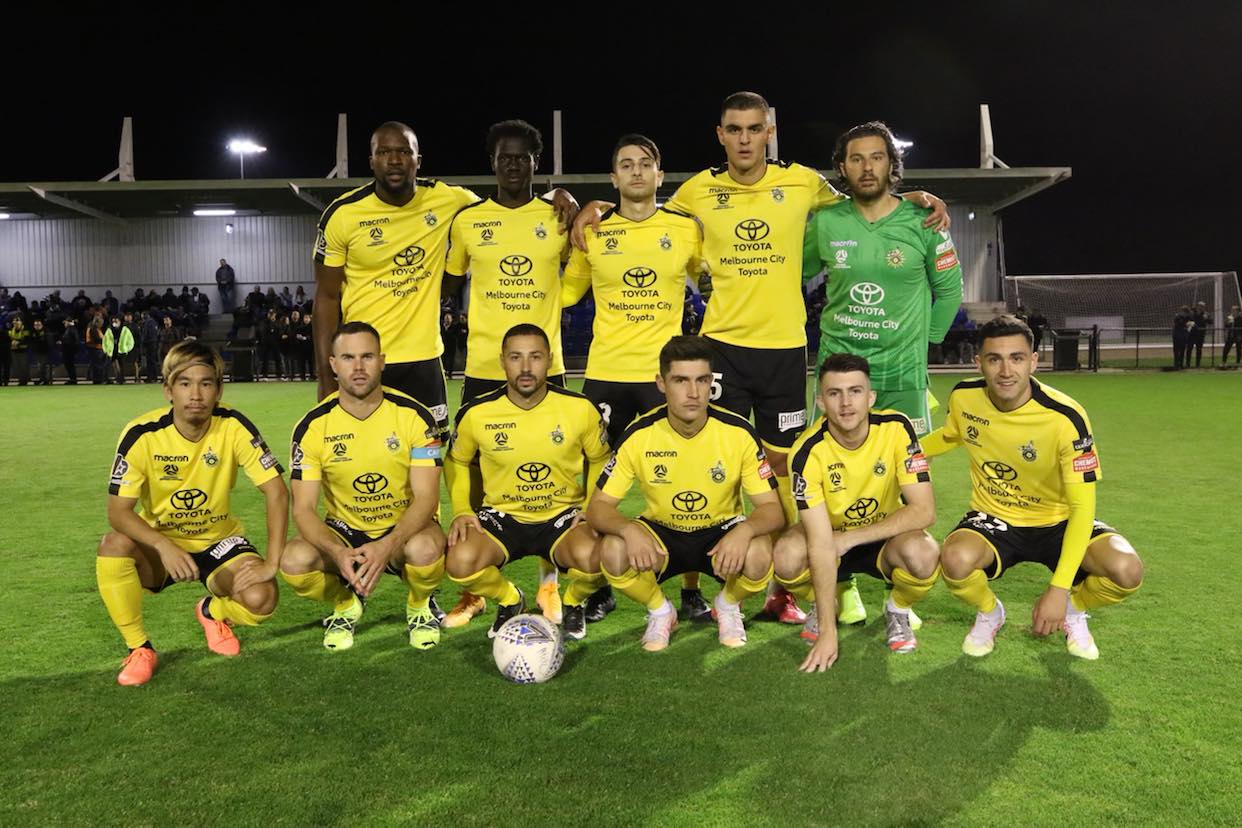 By Nick Rahovitsas   |   April 6, 2021
Comments Off on Warriors Stave Off Knights

On a midweek night of a full round of matches, Heidelberg United came up trumps against one of their historical rivals Melbourne Knights on Wednesday night at Knights Stadium.

The joy of seeing skipper Adrian Zahra and Sean Ellis back on the pitch rose to that of elation for the supporters of the yellow and black, when the latter’s late strike handed them the valuable three points.

At a stadium where the ‘Bergers have solid record since 2015, the eye of the tiger mentality was set to continue with assistant coach, Steven Pace, igniting strength in his star-studded line up.

A tight contest saw Dusan Bosnjak, celebrating his 150th NPL appearance, create the ‘Bergers first opportunity by looping over a pass to Okada, who had his low driven strike blocked by Manos.

In the ensuing arm wrestle, Zahra’s shot flew wide of the top corner as the acting skipper tried to emulate Eoin Ashton’s goal in the previous game.

Having got through the Knights’ first half dominance in possession, the ‘Bergers had a more positive start to the second half, including Ellis twisting and turning before feeding off a pass to Bosnjak, whose shot was saved.

The persistent effort of the Warriors was rewarded 10 minutes before time when substitute Dane Milovanovic pinpointed a lengthy pass to Ellis. The gifted Ellis took control of the ball in full flight, before cutting into his left and almost inevitably, magnificently curling the ball into the bottom corner. A first class finish from a sublime player who often takes our breath away with his first-class performances.

Stand in coach Steven Pace spoke to HUFC-TV in the post-match interview about the similarities this match had with the Green Gully win.

“This game reminded me of the Green Gully win, we didn’t come out to well in the first half, dominating possession. The boys’ heart got us through half-time and with a clean sheet, we sorted it out in the break and got the three points,” he said.

The man who produced the winning goal with his golden left foot, Sean Ellis, also spoke to HUFC- V after the game.

“I have scored a few goals here now, and a few winners as well. I am just delighted to be back after three weeks out, so it has made me that much hungrier, and we did very well.”

One of the recent arrivals to the club, the Canadian centre back Mallan Roberts, shared his thoughts about settling into the club culture.

Heidelberg United will aim to continue the recent winning streak on Saturday (April 3), when it comes up against Nunawading City at 3pm at Mahoneys Reserve in the fourth round of the FFA Cup.